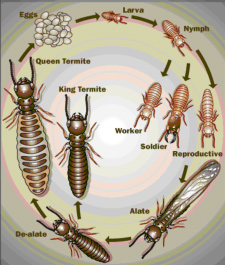 Wood destroying insects and organisms are a concern in any home with a wooden structure or components. Failure to properly identify and deal with the presence of WDO and WDI can lead to damage to the structure and other wooden components of the house and create the need for expensive repairs. The links below provide general information on the major varieties of WDO and WDI encountered in the United States. 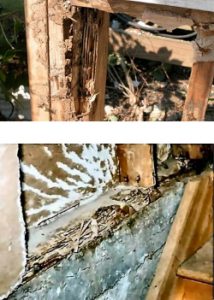 Termites are social insects with a caste system that includes reproductives, workers and soldiers. Each caste has a unique role in the colony. The soldiers defend the colony against invaders (typically ants) and the reproductives yield new colonies. What makes termites a concern for humans is the worker caste, which bore through wood by digesting cellulose material from structural timbers.

A colony begins when the primary reproductives, also called the king and queen, mate and lay eggs. The eggs hatch into nymphs. The queen determines which caste the nymph will belong to based on the needs of the colony. She then secretes chemicals that transform the nymph into a soldier, worker or reproductive. The termite’s type/caste is determined by the secreted chemical.

A typical homeowner’s insurance policy does not cover destruction caused by termites, even though they cause over 1 billion dollars in damage to homes throughout the United States each year. It’s important that homeowners understand the threat of termites, and take the necessary steps to protect their homes.

Subterranean termites are extremely destructive. First they build tunnels to wooden structures, and then they burrow into those structures to obtain food. Any wood or cellulose-containing material constitutes termite food, and given time to do so, they’ll eat until nothing is left but a shell. Termites avoid light and air, so they build their colonies where you’re not likely to stumble upon them.

On the off chance you do see them, remember that it’s easy to confuse termites with ants. Fortunately, there are features that distinguish them. 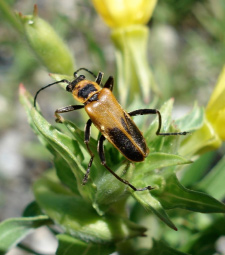 Wood boring beetles, like fungal decay, can if in the right conditions cause considerable damage resulting in the weakening of structural and joinery timbers.

Woodworm is a description commonly and loosely applied to all wood-boring beetles, but there are many species of beetle common to this country; Common Furniture, Death Watch and Weevil to name just a few. The life cycle of the wood boring beetle is normally always near completion before most home owners are even aware that they have a problem. After mating the female beetle will lay her eggs into cracks and rough surfaces of the timbers, which will then hatch and begin tunnelling into the timber. The number of eggs and larval stage of the beetle will vary according to the species of beetle. The larvae will pupate after several weeks (depending on the species) and the adult beetles develop and commence boring their way out of the affected timber. 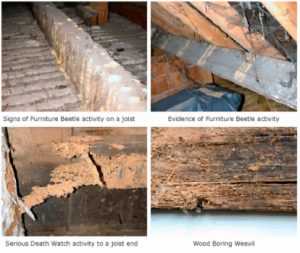 Activity by wood borers would always normally be confirmed by the presence of fresh bore dust (frass) on the timber and a clean exit (flight) hole. The extent of beetle infestation and the damage caused will always be dependent on the particular beetle and the type of timber being attacked. Some beetles such as the death watch & weevil prefer damp or decayed timber for its survival and in some cases chemical treatments are not always required to eradicate the infestation, as controlling moisture levels and drying the timbers may be all that is necessary. It is therefore extremely important that the correct identification of the beetle species is made (particularly when dealing with period or buildings of historic interest), as the wrong identification can lead to the unnecessary and expensive use of chemical treatment.

Wood wasp and Horntails damage in homes is likely to be more cosmetic than structurally weakening. Emerging wood wasps and Horntails can chew through any substance: wallboard or plaster walls, hardwood floors, carpeting, linoleum, non-ceramic floor tiles, and other interior surfaces. 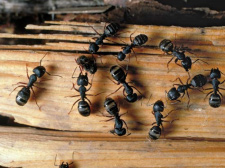 Carpenter ants (Camponotus spp.) hollows out wood to create nests called galleries. Though they do not eat the wood, the boring activity can lead to structural damage in wood components. The by-product of the boring is called frass and looks similar to sawdust or pencil shavings. Frass is the most common evidence of carpenter ant infestation.